Do human activities influence genetic dynamics of invasive plants in remote islands? We used a highly unusual opportunity where two close sub-Antarctic islands differ substantially in their extent of human activity. Human-occupied Marion Island and unoccupied (and almost pristine) Prince Edward Island, with very different levels of human impact over time. We studied the invasion of the grass Poa annua L., one of the most widespread and successful invaders of the Planet; an excellent colonizer of exposed areas that can quickly become dominant once established, thanks to characteristics such as: polyploidy, apomixis, perenniality... We tested whether increased propagule pressure leads to higher genetic diversity, and whether historic human activities can be detected from current population genetic structure. We found support for both ideas! On both islands, high genetic diversity was apparent at human landing sites, and on Marion Island, also around human settlements, suggesting that these areas received multiple introductions and/or acted as initial introduction sites and secondary sources for invasive populations. 70 years of human activity associated with a meteorological station on Marion Island led to a distribution of P. annua around human settlements and footpaths, which facilitates gene flow among geographically separated populations. This was not the case for Prince Edward Island. 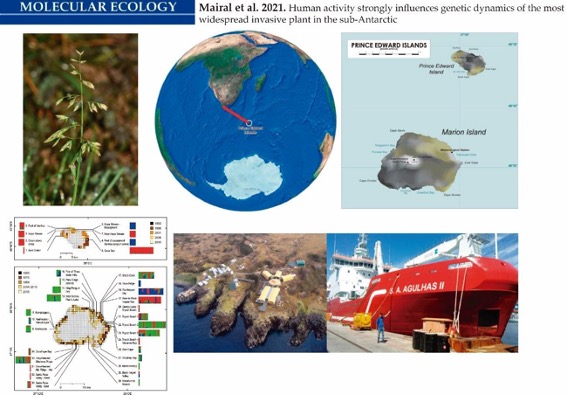