The centre–periphery hypothesis predicts that habitat suitability will decrease at the edge of a species’ range, a pattern often questioned by empirical data. Here we explore if habitat suitability decreases southwards and shapes the abundance distribution of rear edge populations of forest birds within the restricted geographical setting of the south-western Palaearctic (Morocco). We also test if birds endemic to the area fit more poorly to the latitudinal decrease in habitat suitability due to the putative effect of adaptations to regional conditions. Results show that habitat suitability decreased southwards (figure), supporting the predicted relationship between ecological and geographical marginality in most species. Abundance was positively correlated with habitat suitability and negatively correlated with distance to source areas in the north. This suggests that the southward decrease in habitat suitability predicted by the centre–periphery hypothesis shapes the distribution of rear edge populations of forest birds within the south-western Palaearctic. As most of these populations are endemic, the results suggest that they track the gradients in isolation within the geographical setting of north-western Africa. These results also support the vulnerability of these isolated, peripheral populations of forest birds to large-scale environmental changes in a region under the effect of increasing drought and temperature. 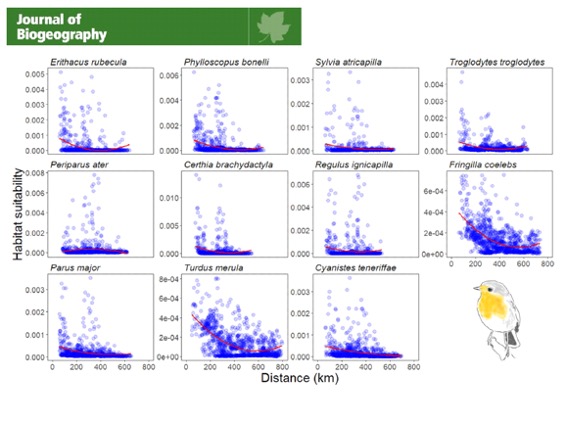