A comparative analysis of toxicities of both arsenic forms (arsenite and arsenate) in the model eukaryotic microorganism Tetrahymena thermophila (ciliate protozoa) has shown the presence of various detoxification mechanisms and cellular effects comparable to those of animal cells under arsenic stress. In the wild type strain SB1969 arsenate is almost 2.5 times more toxic than arsenite. According to the concentration addition model used in binary metallic mixtures their toxicities show an additive effect. Using fluorescent assays and flow cytometry, it has been detected that As(V) generates elevated levels of ROS/RNS compared to As(III). Both produce the same levels of superoxide anion, but As(V) also causes greater increases in hydrogen peroxide and peroxynitrite. The mitochondrial membrane potential is affected by both As(V) and As(III), and electron microscopy has also revealed that mitochondria are the main target of both arsenic ionic forms. Fusion/fission and swelling mitochondrial and mitophagy, together with macroautophagy, vacuolization and mucocyst extruction are mainly associated to As(V) toxicity, while As(III) induces an extensive lipid metabolism dysfunction (adipotropic effect). Quantitative RT-PCR analysis of some genes encoding antioxidant proteins or enzymes has shown that glutathione and thioredoxin metabolisms are involved in the response to arsenic stress. Likewise, the function of metallothioneins seems to be crucial in arsenic detoxification processes, after using both metallothionein knockout and knockdown strains and cells overexpressing metallothionein genes from this ciliate. The analysis of the differential toxicity of As(III) and As(V) shown in this study provides cytological and molecular tools to be used as biomarkers for each of the two arsenic ionic forms. 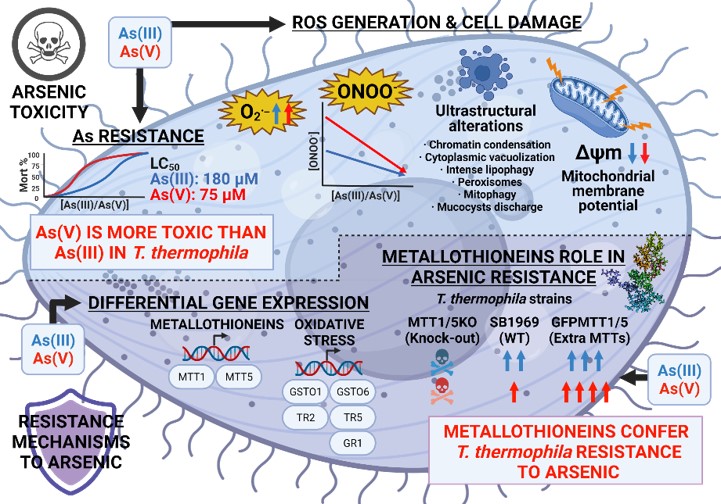